What every cook should understand about cooking Southern Foods.
From My Kitchen to Yours,
tips and recipes that make Southern foods so darn good. 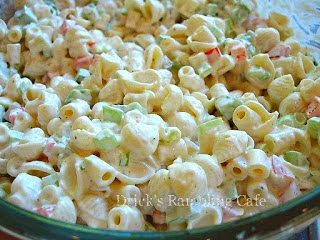 To make good pasta salad, and we mean the recipes that you hand down from generation to generation, you gotta start with a good, old-fashion dressing made of fine southern ingredients. And it's more than that, there's the technique too!


A Classic in the South - It's all about the dressing. 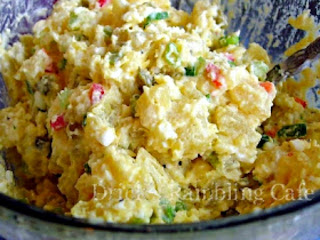 Made the way Southerners love it! Buttery gold potatoes in a creamy, tongue-tickling deviled egg dressing that is rich in flavor. This is the recipe you'll want to make for that special dinner, cookout or Sunday Dinner - maybe that special someone.


A Southern Cold Salad like Momma made . . . maybe better! 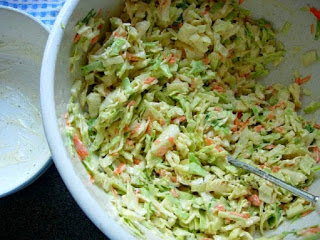 Creamy and sweet with just enough tartness for enjoyment. Like so many Southern salads, we start with a dressing as we like to call it, emulsifying oil into a creamy base and layering in flavors making this slaw very rewarding and satisfying.

The start of many Southern foods begins with making a proper roux. It is much more than cooking together flour and oil in creating a thickener. It is a traditional institute in kitchen know-how and doing so correctly yields the basis for some mighty fine gumbo, stews, jambalaya, sauces and so much more we Southerns love to eat.


The term 'southern peas' refers to hundreds of different varieties of peas and are subdivided into four main groups: Field peas, Crowder peas, Cream peas and Black-eyed peas. Learn more about Southern Peas and how to cook them - southerly of course!

The why's and how's of gravy making. Learn the difference and the varying ways to use flour-base thickeners. Great knowledge base for all kitchen enthusiasts with diverse listing of ways to make sauces and gravies.


"Smothered" is a good thing - ya know what I mean?


A homey cooking technique in tenderizing pieces of meat over slow heat for several hours using a caramelized vegetable reduction intensified by and glorified by the flavors of a creamy, roux base gravy. See also recipe for Smothered Chicken over Creamy Cheese Grits.


How to Barbecue Chicken and Poultry


Learn the techniques in preparing and cooking the best tasting chicken that's moisten throughout. Recipes included for four methods: Brine, Rub, Sop or Mop and Baste. Whether you do two, three or all four steps results in successful tastes.


Recipe and cooking method for barbecuing ribs that will produce succulent ribs with an outstanding taste. The southern flavor is such a favorite, many folks do not use a BBQ sauce. The combination of rub and mop is that good.

High on the hog eating starts with a good Boston butt, tickling it with just the right seasonings before tenderly cooking it to perfection. Interesting facts along with complete descriptive instructions on cooking and shredding method resulting in one fine plate of pork goodness.

It's a Tradition: Red Beans on Monday


Cooking red beans on Monday goes back to the days when cooks did many things, like washing the household clothes too and slowly cooking beans over low heat all day gave them time to tend to their many chores. Steeped in tradition also are recipes from Creole kitchens that produces many fine bean dishes like these: Sausage and Bean Medley, Southern RB, Sausage and Rice, RB and Rice - the Real Deal.


An outstanding, full-flavored crab stuffing I use for flounder, lobster tails and shrimp and with a little addition of shrimp with the crabmeat, I use it for deviled crabs too. Heck, if ya feel like it, use it for phenomenal croquettes or boulettes.

How to Fry Shrimp - Facts Every Southerner Should Know

Facts about frying shrimp plus a very southerly recipe using a cracker crumb meal batter to give the shrimp a light seasoned coating of crust. Hey, down here it's all about the shrimp!


There are many ways to prep fish before frying but in the south, along the Gulf Coast where the delicate meat is a valued commodity, the simple way of a light cornmeal dusting wins out every time. Get the facts and recipe here.

This is how we do Goobers


No need to wait for a new crop of green peanuts. Fresh is best but we sometimes will use raw unshelled as well. Recipe for boiling peanuts using the stove top method and the slow cooker - both with outstanding results.