Salad Time is a Good Time
This recipe is one I am including in a Mexican cookbook, another work in progress tentatively called My Mexican Cookery, and probably publishes after I finish the Bayou-Creole one that I can never get back to working on... The recipe is a redo of one I found on the internet and has a delightful tropical taste reminiscent of summer days sunning, eating and drinking on Mexican beaches.
Roasted Corn, Jicama and Mango Salad 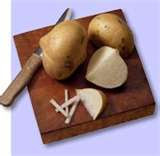 Preheat the oven to 400 degrees.

Place the ears of corn on a baking sheet and put into the oven for 45 minutes.

Remove corn and let cool. When the corn has cooled, remove hush and silks and stand it on its end. Using a sharp knife, run the blade down the cob to cut the kernels off.

Toss the jicama, mango, red onion, tomatoes and cilantro in a large mixing bowl. Add the cooled corn and toss with the vinaigrette. Fold in the avocado. Chill until ready to serve.
Labels: Mexican Salads