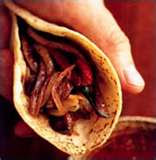 The Real Deal in Mexican Beef


Just south of the border close to the Texas plains and along the Tamaulipas coast is a small town known as San Fernando. The region is known for beef has some of the best eateries that serve it up in great style. One particular dish is Fajitas al Sombrero with the sombrero being a tortilla that tops the mound of steak. The recipe below is a rendition of what’s served in such restaurants. It is a simple and satisfying example of Mexican eats.
Tamaulipas Fajitas

Heat a grill pan or use your outdoor grill to cook the steak. Season both sides with salt and pepper to taste and grill to desire doneness. Remove and cut into thin strips, set aside.
Cook the bacon in a large skillet, remove and cook the onion and both peppers in the grease until onions are soft. Add the strips of meat, bacon, the tomatoes and toss mixing ingredients. Top with the cheese and just as the cheese begins to melt, remove and mound mixture among 4 plates. Top with the tortilla and add a dollop of salsa. Serve with addition tortillas and sliced avocados to roll up if desire.
Labels: Beef Mexican Recipes