The civil war had halted all revelry. Joseph Stillwell Cain was a store clerk in Mobile, Alabama in 1865, who had noticed how much the war had mentally worn down the populace. He, like most of his fellow Mobilians, were still under Union occupation, but the mental war between the ex-confederate soldiers and union authorities still raged and was taking a toll. During the occupation several edicts had come down from Union leaders in an effort to totally break the the will of the the Mobilians. To make matters worse, finding themselves "men without a country" following the end of the Civil War, members of any branch of the Confederate forces were forced to sign "Amnesty oaths", to restore their citizenship rights.

After all, these were the people and soldiers that kept Union forces at bay, even after the battle and fall of Mobile Bay to the Union Navy in 1864. During the "bread riot of 1863, and the Union blockade which substantially reduced the trade in Mobile for the duration of the war, its people endured. Disruption of foreign trade persisted after the war, as Union occupying forces, which took the city of Mobile in April 1865, closed the port to foreign trade until late in August 1865.

Joe Cain knew however, that to openly voice any opposition to the occupation of Mobile by the Union troops would be viewed technically, as treason. The mental drain, however, had to be stopped, and the spirit and pride of the Mobilians has to be restored.

It was against this back drop that Cain, in 1866, decided the best way to accomplish this renaissance of the spirit, was to revitalize the Kraft parade, the celebration of Mardi Gras in Mobile, which had been halted during the conflict. One night, he led a group of revelers in a parade through the city, using a "borrowed" coal wagon and dressed in improvised costumes depicting a Chickasaw Indian chief from the local Wragg Swamp, he called himself Chief Slacabamorinico. The significance of choosing this character was a backhanded insult to the Union forces as the Chickasaw, had never surrendered during the civil war. He mocked the union military that controlled Mobile at the time.

This celebration gave the Mobilians a much needed boost, when the Union leadership learning of the, "one horse stunt" were furious at the man, but couldn't touch him because he had voiced no opposition.

In 1867, Cain reappeared, this time with a group of confederate soldiers, who were also musicians, calling themselves the Lost Cause Minstrels (and they paraded until 1879).
The parade continued to give Mobile back it's spirit and pride and allowed the city to hold its collective head up, and continue to progress and to some degree, move on.

The Joe Cain Procession was started in 1967 by a local folk singer, historian, writer named Julian Rayford. He wanted to bring recognition to the man who revived Mardi Gras activities in Mobile. Julian Rayford dressed as Chief Slacabamorinico in his coal wagon. Cain's Merry Widows follow, a mysterious group of women in black, throwing black roses and Mardi Gras beads. The number of participating groups has grown over the years, now at 32 (a limit set by the Mobile Police Dept.). Julian Rayford also petitioned for Joe Caine and his wife's body to be moved from Bayou La Batre to the Church Street Graveyard in downtown Mobile, which has been closed to new burials since 1898. Julian Rayford died in 1980, and his body was buried right next to Joe Cain's. After the Joe Cain Procession, Cain's Merry Widows partake in a Mardi Gras funeral at the grave site of Joe Cain. Weeping, dancing and tossing beads in memory of Joe Cain. 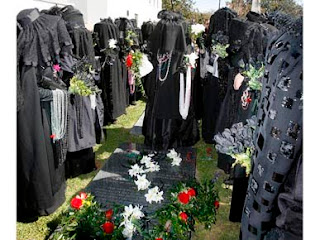 The widows will mourn in 2010 for the 36th year. These ladies toss moon pies, beads, and black roses to the procession revelers. The Merry Widows now ride in the procession in a mock trolley car.

Thousands of spectators gather in the old graveyard, listen to Mobile's Excelsior Band, and marvel as Cain is memorialized by Mobilians dancing atop his grave. When the ceremony begins in the graveyard, several veiled women dressed in mourning robes, know as Cain's Merry Widows, cry aloud and lament his loss to the world. Joe Cain Day remains one of the most popular events of Mobile's Mardi Gras celebration, and its public parade is seen by many Mobilians as a response to the stiffness of the traditional mystic societies.

So, before, during and after the parade, what do we enjoy eating and munching on to soak up the day's libations? Normally I make a big ol' pot of red beans to top off a big ol' bowl of rice and a few links of sausage for each guest. Today, however, I am working on the Queen's Luncheon set for tomorrow. I have in place at home a little of everything ~ onion dip and a shrimp & crab spread to go with crackers, a platter of cold cuts with ham, turkey, roast beef and various cheeses, homemade pimento cheese and my chicken salad for sandwiches. The chicken salad is one we enjoy all year, especially during the summer at the beach. Today, it will go great on crackers or between slices of plain ol' white sandwich bread. Enjoy!

Keep your chicken salad simple. Remember, it's chicken salad. The other ingredients are incorporated with the chicken to moisten, add crunch and create a southern flavor I grew up eating.
Labels: Chicken - Poultry Dips and Spreads