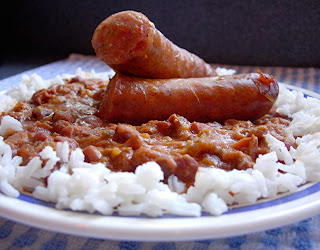 That thing that makes you go... yummm

I've given you my recipe before on cooking red beans and the recipe for making homemade the ingredient that brings about that famous New Orleans taste - pickled pork. To me, the underlying flavor just can't be beat and if you have ever enjoyed the taste of true New Orleans style red beans, then you know there is that something extra ingredient that sets theirs apart from other regions. The only way to describe it is to say that layered in with the sautéed trinity of Louisianian cookery, along with the spices and the rich broth, is a mellow vinegary brine that is so subtle, most folks can't tell exactly what the flavor is or even able to put their finger on it or in this case, their taste-buds.  But the flavor is there and it makes a big difference.

Folks talk about comfort food from time to time but in our house it's one of the necessities of life. In fact, I haven't met too many platefuls that aren't comforting.


What can I say? Nothing wakes your senses as a house filled with the aroma of good, homemade cooking. And today, my taste-buds are tingling with anticipation of some fine, southern Red Beans and Rice.
Like many Creole or Cajun recipes, you gotta start with the trinity: onions, bell pepper and celery. 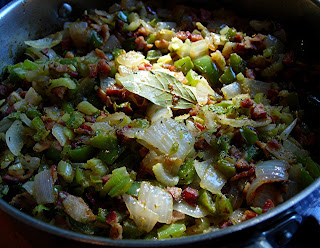 In the case today, I sautéed a couple pieces of chopped bacon with a couple links of smoked Conecuh sausage to render a little grease and add a depth of flavor, and then wilted down the trinity. From there, I added the seasonings. 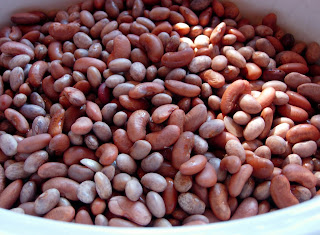 The beans soaked over night in a slow cooker which prior had swelled during about 4 hours with the setting on warm. Now I normally use Louisiana red beans which are smaller than these light kidney red beans and today I also added some pintos in the mix. I know, not your typical red bean recipe, but sometimes ya gotta cook what you have on hand. Normally, I do not pre-soak my beans, letting the starch meld into the pot making for a thick sauce. But since I'm using pintos too, I drained off the water and will mash up a cup or so at the end to ensure creaminess. There is more than one way to cook beans.

Into the slow cooker went the beans, the trinity mix, pieces of pickled pork and about 5 cups of chicken stock. 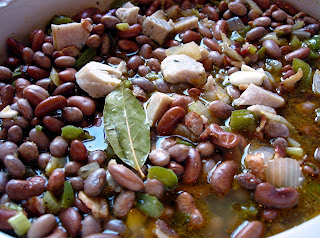 From here, I just set the cooker on low for 10 hours and went about my way. Ended up adding more of the chicken stock toward the end.

The result, as you see in the top photo, is some of the best red beans & rice I've made, or maybe I was just in the mood for some comfort food.  As most times, I like the sausage served on top and several cornbread muffins off to the side. I don't think there is nothing better in sopping up that juice that cornbread. Well, maybe that crusty New Orleans 'angel cloud' French bread, but I didn't have that on hand either.

Here are the recipes from previous posts: