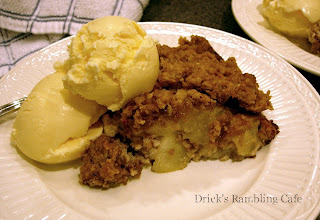 Reinventing Apple Pie
~thanks to Ryan & Lee
There is a dessert I have made umpteen times in the last few months, mainly 'cause it is so good, it's so easy and because it is one my Grandmother often made. She called it Apple Crisp which as you know is nothing more that diced apples, a few raisins, chopped nuts and a little goody spice covered with a buttery nutty crumb topping. It's in the cookbook for those of you who have graciously ordered one. Quick to put together and quick to make, it disappears quickly too. I sometimes mix the apples with pears, even bits of satsuma and always add a splash of bourbon.

Then, a while back, my good friend Ryan posted a recipe for a delicious cranberry bar and it sounded so good, that ol' flickering light went off and I immediately thought of combining the two together for what I knew would be a whole nutter version of Grandmother's dessert. You can find Ryan's recipe for Cranberry Crisp Bars over on his blog, Cajun Chef Ryan. 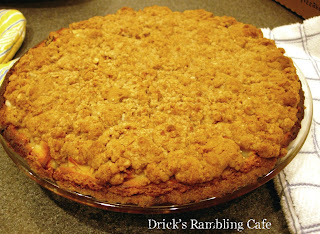 And when I spoke on Sunday with my sister now residing in Tennessee, I ran by her my intent of recreating an apple pie. Busy as she was, with a pot of gumbo on the stove, beans soaking to make my Ham-Bone Soup and a container of chicken soup already in the fridge, she and I came up with this recipe. You see, she expected to be hid hard by a snowstorm and was getting her cooking out of the way, making time to play with her grand kids. Here is what we came up with... Enjoy!

To a food processor with a metal blade, add the first 5 ingredients and pulse until a crumb mixture forms. Press half of the mixture into a large 10-inch pie dish (I will use a deep dish pan the next time, and there will be a next time) forming a shell along the bottom and up the sides. Bake in the oven for 10 minutes. Refrigerate the other half of crumb mixture for the topping.

Meanwhile, mix in a bowl the remaining ingredients. When shell is done, remove from oven, let cool for 10 minutes and pour filling into shell. Bake for 30 minutes.

Remove pie from oven and crumble the refrigerated crumb mixture on top. Bake another 20 minutes. Remove from oven and let rest at least 30 minutes before serving.

Notes: The recipe as is makes for a fair amount of crumb topping which I liked. If you prefer your apple filling to shine in a pie, when adding the topping, reduce by half saving remaining for another use.
Or, bake this in a oblong casserole dish and add another apple. The filling should stand up just fine with the addition.
Labels: Desserts Pies