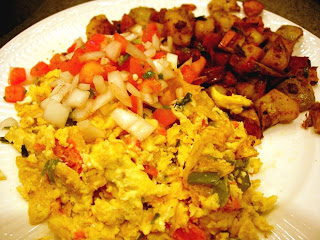 My kind of breakfast


Now if someone were to prepare breakfast for me, say for a lazy Saturday, a sleep-in Sunday or even heaven-for-sake Valentine's Day, this would be my request. I mean, I hope they would at least ask my preference.

I can not think of many platters of breakfast foods I would like better than a scramble of eggs seasoned with mild chiles and roused in harmony with tomatoes and cheese. This recipe is one I found a while back from one of Martha's mags and immediately liked the added crunch of the tortillas.

The fried potatoes are my version of everyone's favorite side and sweetened with sautéed bell peppers, green onions and seasoned with the smoky taste of chipotle and flavors of Mexican sausage.

Heat oil in a large skillet over medium high heat. Add tortillas, tossing to cook evenly until golden brown, about 6 minutes. Remove with a slotted spoon to paper towels to drain.

Discard all but 2 tablespoons of oil and add pepper and onion. Toss to coat in oil and cook until tender and soft, about 5 minutes. Stir in the tomato and cook until in starts to melt down a bit, about 3 minutes. Season with salt and pepper.

Add the eggs, tortillas and the cheese. Cook stirring constantly until eggs are set, about 3 minutes.

Heat a heavy skillet over medium heat and cook the sausage until brown stirring to cook evenly. Remove sausage to drain on paper towels.

Toss the potatoes with the seasonings and flour. Add enough oil to make about 1 tablespoon to the skillet. Toss in the onions and peppers and cook until onions are clear.

Toss in the potatoes and cook, not stirring until potatoes are brown on the underside. Yep, you will have to check with a spatula. Flip potato mixture over, sprinkle on the sausage and brown the other side. Do not stir while potatoes are cooking, something I tend to do, but trust me, just let them alone to reach a nice, gold brown color.

Remove skillet from heat and hold until plating or to a warm platter to serve tableside.
Labels: Beverage Egg / Cheese Mexican