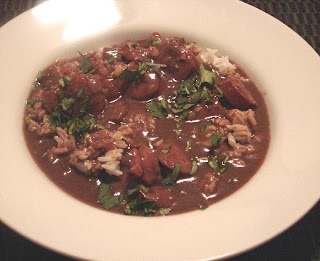 Believe it or not...

Chicken and smoked sausage are the two most used ingredients in the south when making gumbo, more so than seafood like shrimp, crab or oysters. In fact, this gumbo is most popular during the Mardi Gras season, even in my house when large crowds come-a-calling. It's fairly simple to make, feeds a crowd and holds well during the afternoon or evening as guest come and go.

The basis for a good gumbo always starts with a good roux. Everyone has their own way I suppose, but I believe a dark roux (dark Creole brick color) works best for light foods like chicken and seafood, a blond roux (the color of light brown sugar) does better for dark meats like duck, turtle meat, so on, and in the middle is the medium tan roux (peanut butter to milk chocolate in color) that does okay for most everything, especially okra or a greens medley like Z'Herbes. What's the difference? All in the taste. You see, the darker the roux the more intense the flavor, a nuttier, almost roasted flavoring agent that adds an element of taste in Creole and Cajun cuisine. Now, the darker the roux, the more you will need to add in volume to aid in thickening, normally four times as much as that of a light roux. Depending on the type of gumbo I am making, I like to toss in the onions immediately when the darker roux color is right and quickly toss them around. They will sizzle, pop and hiss at you but that's all right, the brown caramelize flavor will add a totally different depth of flavor; you see, adding all of the vegetables at once sometimes puts just too much stress (or liquid) for the roux.

Gumbo is almost always thickened with a roux, sometimes with both a roux and okra and sometimes with file'. All three are thickeners but are also very different in altering taste. I believe file' should never be added until the end of cooking, while removing from the heat as simmering can affect the taste and break down the thickening power. I normally serve file' at the table allowing guest to sprinkle it on at will, more for taste than for a thickener. I depend on a roux and okra for binding.

On special occasion, shrimp or oysters are added to Chicken and Sausage Gumbo making for holiday or Sunday fare.  The type of sausage depends on your region but in respect to a good gumbo, a good spicy smoked sausage is a must. Andouille, Cajun Smoked or any good flavored smoked southern sausage is the choice. And as for the chicken, why a good ol' stewing hen works just fine. Something to be said 'bout tough old birds.

So, after years of making this for friends and family stopping by before or after parades, normally doubling the recipe making it in two large stockpots, I share with you my Mardi Gras Gumbo... Enjoy!

Oh, and here are a few snaps on my phone as I left work today...


Now for the recipe:

Place the hen and the next 4 ingredients in a large stockpot. Add salt and pepper to taste. Cover with at least 2 1/2 quarts water and bring to a boil. Reduce heat to low and simmer for 45 minutes. Remove chicken and set aside to cool. Strain the stock into a large container and discard the vegetables. Return the pot to the stove and cook the sausage on medium low with a little water for about 15 minutes. Remove sausage and discard the liquid and grease. Wipe out the pot.

Meanwhile, skim and remove the grease from the stock and keep the stock hot.
Add the fat or lard into the pot over medium high heat and stir in the flour to make the roux. Stir with a flat tip paddle spoon lifting the flour from the bottom of the pan as you stir. Turn down the heat to medium low as the roux begins to brown, normally around the tan stage, and even lower as it darkens, about 30 minutes total in making the roux. Remove from heat and stir in the onions mixing well. Toss a minute or two until caramelized and stir in the bell pepper and celery. Cook and stir another 5 minutes returning pot back to the stove.

Add about 2 quarts of stock to the pot, a little at a time stirring all while to incorporate into the roux slowly. Add the tomatoes, okra and the seasonings, stir and bring to a simmer. Cook covered for about 30 minutes.
Meanwhile, de-bone the chicken and break meat into bite size pieces. Spoon a little stock over meat to keep moist.

Add the chicken and sausage and cook another 15 minutes.
Serve with white rice, a sprinkle of file' and a spoonful of chopped green onions and parsley.

Notes: I many times after cooking, add the gumbo to a large slow cooker or two, and hold at warm temperature until guest are ready for a bowl or second helping.
Also, like many south Louisiana gumbos, this recipe makes a thinner base than most seafood type gumbos but it thickens by the second day, when gumbo is really its best.
Labels: Cajun Chicken - Poultry Classics Gumbo Mardi Gras Soups - Stews
Location: Washington Square, Mobile, AL 36604, USA 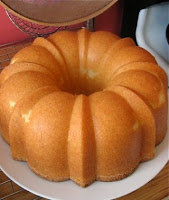