Last year I got on a kick of agrillin' everything using a marmalade as the starting point, remember that? From my satsuma-kumquat marmalade we enjoyed a roasted Turkey Breast at Christmastime and a delectable Crown Roast for New Year's. This recipe is similar as the roast but with a mere mo essence of flavors that I think is just outstanding for pork, especially grilled off the heat over a 3 to 4 hour period. Succulent, moist, tender all because of the marinade that's been a'workin' on the meat fibers overnight. Flavorful, tasty, savory from the spices and fruits that's 'bout the best seasoning I know for pork.

Now, for those not from the south, I thought you might need a lesson on our dialect or taukin' as you can see, sometimes I throw it in for fun. I think it is very important to speak (and write) the dialect of your upbringing whether you are a Midwesterner, a Valley girl or surfer dude, from Jersey, from Texas, heck, even from furr south. Ima starting ya'll off easy from the beginning, with the letter 'a', spoken as 'ah'. We tend to add this as a prefix to many words to beautify the importance of the meaning. Like the present participles above agrillin' and aworkin'. We also tend to emphasize words used as future tense auxiliary as in ahm agonna git yo Paw iffin dey cum alookin'. Just as we like to add an 'a' for importance, we also like to take it away sometimes too. It's all 'bout what makes sense, to us that is.

So you see, when it comes time to gittin' down and agrillin', we don't mess 'round. Dat's sum serious bidnis in des'here parts. Seriously, dissin one fine marinade folks.  Enjoy! 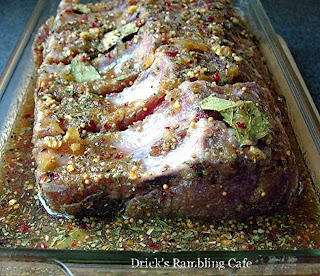 Combine ingredients in a saucepan over medium heat, bring to a boil and then simmer covered on low for 15 minutes. Let cool completely before using as a marinade for meats. After several hours, add a handful of ice if needed to help cool it down but try not to dilute it too much.

As for agrillin' - here's what I did: Remove roast from the marinade and strain the marinade through a strainer to remove the spices. Place the liquid in a saucepan and add about half cup of apple juice, bring to a rolling boil and then simmer for 5 minutes. Remove any foam as it forms and then let this sauce cool a bit as now it is your mopping sauce. Brush off most of the spices from the roast. As you can see, I cut the roast through the rib section to about a half-inch depth before placing in the marinade. And I think it paid off by letting more flavor reach deeper.
Set your grill to low cooking (about 275-300 degrees F) with one side or the middle area unlit (or coals along the outside if using charcoal). Place the roast with the ribs facing down on the cooler part (away from the heat) and let cook with the cover closed for 1 hour. Turn the roast over and begin mopping it with the sauce every 20-30 minutes keeping the cover closed as much as possible. Turn the roast over every hour and cook until the meatiest part reaches 140 degrees F. Remove and wrap in heavy foil. Let set for about 10 minutes. The internal temperature should rise to at least 145 degrees F. after about 3 minutes. Slice each rib from the roast and enjoy..... oh, I served it with a sweet BBQ mustard sauce  (1 cup Cattleman's sweet BBQ sauce, 1 tbsp spicy brown mustard & 1 tbsp bourbon).
Note: I did not, but this would be great if you wanted to add a little smoke flavor using woodchips... also, cooking pork roast to at least 145 degrees F is from the new guidelines by the USDA and lets the meat retain more flavor and moistness. Ground pork should still be cooked to 165 degrees.