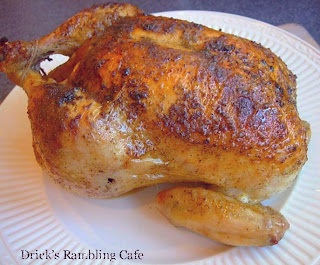 Of all the baked and roasted lemon chicken recipes I remember throughout my life, one of my fondest came from grandmother’s cook and it has taken me a long time to remember exactly why. Roasting whole chicken, as I know it, means fiddling with it constantly, basting several times, turning and flipping to even out the browning process and a diligent watch in keeping the breast meat moist while the thigh cooks done. Annie Bell, who I could write a book about, was a real character, always wearing her wig slightly crooked and always full of tomfoolery, doing nonsense pranks all the time, but when it came time to cook chicken, she was no fool. I remember her cooking a whole bird in a heavy cast iron skillet, maybe a shallow Dutch oven without the lid, and it being the best roasted chicken ever…you understand what I’m saying? Now, that’s a pretty strong statement and I’ll explain.

For those not familiar with Engagement Chicken, well first, no, not meaning anyone I know. The story goes back to 2004 when Glamour Magazine first published the recipe of a fashion editor’s proposal over a lemon basted, roasted chicken. Passed along the ranks of staffers, the bird worked its way into the pages of the magazine. Later in 2009, editor Lindsey Unterberger shared her story with an itching for a ring. After dating the same feller for 7 years, she decided to make him a believer. You know the theory, as most mothers would say, ‘love starts through a man’s stomach’. As told, over 70 and counting couples have committed to each other over a crispy, roasted chicken served with a secret sauce. Well now, come on - ya'll say yes, I will.

Now, here we have a recipe that will turn a bachelor into the marrying-kind yet I think, if followed the Glamour way, we'll be flipping and basting and finally doing somersaults around the kitchen floor when it gets done. This takes us back to Annie Bell.
And, back to the iron skillet which I find exciting. The reason I am so high and mighty on the outcome of this cooking technique goes back to basic sense and to a kick in the pants when it finally dawn on me after reading an article on roasting chicken. We know dark meat takes longer to cook than white so by placing it into a hot iron skillet allows the bottom to sear, giving it a head start and by cooking it in a confined area, the juices of the bird stays within, the meat bastes as less evaporation of liquid occurs. The dark meat cooks right along with the upper breast and at the end, both are correctly done at the same time.

Here's the boring part: As for tender, juicy meat, this recipe works just fine. We all know the best way to pump moisture into meat fibers is to brine with acid and salt. During the cooking process, the collagen, fats etc work on the tissue to release this moisture outwards but because of the induced salt, at certain peak timing, the action actually reverses and moisture in held inside the meat. We sometimes do not have 12 to 24 hours for brining. Hence, in this recipe, we are salting and applying acid as it cooks, very slowly all while adding a marvelous flavor. Starting out with high heat gives us a good browning effect. Turning the oven off halfway through the cooking process gently cooks all harmoniously and keeps the bird from becoming dry. The actual temperature of the internal meat rises about 40 degrees during this last phase as the outside cools down. The skin becomes nicely brown, rendered of fats which means, beautiful and crispy.The natural juice flow outwards at the end for unbelievable tasting pan drippings. Of course, original recipe is tweaked to my liking.

Foolproof Engagement Chicken
made for 2, unless you’re in a polygyny or polyandry fix

Place the rack of the oven to middle position and heat to 450 degrees F. Place cast-iron skillet or low-sided cooker on the rack.

After washing bird, pat completely dry with paper towels. Mix salt, pepper and thyme together in a small bowl. Rub the bird with the olive oil, inside the cavity too, sprinkle with the salt mixture, inside too, and rub to evenly coat. Pack the lemons and onions inside the cavity, as many as you can. Pull the legs upwards, tie together with kitchen twine and place the wing tips underneath the backside. This will insure proper positioning in the skillet.

Place chicken in the hot skillet with the breast facing up and place in the oven. Bake for 25 to 35 minutes. Test with an instant read thermometer: breast meat should be around 120 degrees F and thigh about 135. Sprinkle the lemon juice over the bird. Close door and turn off the oven. Let set in the closed oven for 20 minutes. Test meat again: breast is ready at 160 degrees F. and thigh at 175.

Remove to serving plate or carving board, cover with foil and let rest for 20 minutes while you prepare the gravy.

Strain the pan juices and skim off the chicken fat. Discard the fat. Pour the pan juices back into the skillet, heat on the stove over medium-high heat. Add the wine and chicken stock stirring to loosen the sucs if any. Mix the flour and softened butter together to form a paste and slowly dissolve into the gravy. Stir over simmering heat until sauce thickens. Carve the chicken and serve with the gravy.  Say thank you Annie Bell and yes, I will.