Will the real Pascal recipe please stand out...

For as long as I can remember enjoying barbequed shrimp I have, like most folks, been confused on the real Pascal's Manale recipe. The more I research it, the more confuse I become as it seems everyone including those who work there are very rigid in their opinions on the correct method and the right ingredients. Many won't say and those who do talk babble endless about what amounts to much about nothing.

Now for those of you not familiar with BBQ shrimp, it has nothing to do what so ever with barbeque as you know it. That's just a misnomer that somehow stuck. Pascale's Manale is the oldest Italian restaurant still in operation in New Orleans, uptown area on Napoleon Ave, opened in 1913
and still has one of the finest oyster bars anywhere. Opened by Frank Manale, it later fell into the hands of his nephew Pascal Radosta thus the two's name. Now, as the story goes, a customer back in 1955 asked for a shrimp dish he remembered from Chicago and Pascal whipped up what would become one of the most famous food dishes coming from New Orleans, Barbecued Shrimp. 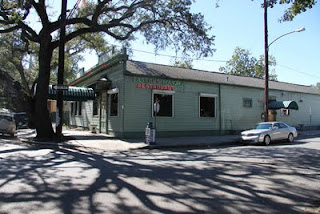 Getting back to the recipe, as said, there are as many versions of the real recipe as there are shrimp in the ocean, well almost. Filtering through the multitude of folks giving their two-cents-worth, I have come to one conclusion; that it don't matter. You see, many critics agree better barbeque shrimp can be had than the ones claiming to be Pascal's Manale own version and any good Creole cook worth a toot can fix a good pan of barbeque shrimp.

Now, with that said, let me back up a few facts I did find and add my own two-cents from my many attempts of recreating this dish. Most all agree the sauce is loaded in black pepper and is made mostly of real butter. I say mostly as many swear by their own sweat that only margarine is used while others say a mixture of butter and oil.  What ever you use, do the shrimp a favor and use at least one stick of butter per pound of shrimp. I suspect the original barbequed shrimp did not contain wine nor beer but was indeed consumed with lots of beer as it is in our house. I think it is up to the cook to season the stock with wine or beer if so desire. I also agree after much researching with the cooking technique from the Junior League of Lafayette Louisiana, that is to cook the shrimp on the stove and then let the dish meld together in a warm oven.

I have made many versions of barbeque shrimp and will continue to do other ways than this one but after finally tweaking this one, by golly it is my favorite thus far. Let me say I am a firm believer in cooking shrimp with head and shell left on. It gives a much deeper flavor. However, this time I did not for I served this as an appetizer to my dinner guest, see note.  The recipe is with shells on. Enjoy! 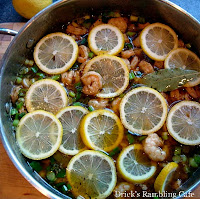 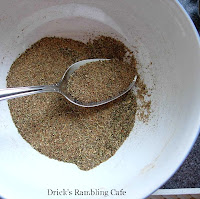 In a bowl, mix the garlic into the melted butter and margarine. Stir in the Worcestershire, lemon juice, pepper sauce and wine. Pour over the shrimp and mix in the onions. Bring to a boil over high heat. Reduce to medium heat and cook for about 3 minutes stirring occasionally. Cover with foil. Turn off heat in the oven and place skillet in oven for 1 hour or more to let the shrimp absorb the flavors of the sauce. Remove from the oven when you just can't stand it any longer. Lay the lemon slices over the top for garnishment.

Serve in bowls with crusty French bread on the side to soak of the sauce. I like to serve this with a salad, corn and potatoes.

Note:  For appetizers, I used 51-60 count shrimp gulf white shrimp, peeled and deveined. I added the butter mixture to the pan and brought it to a boil, then added the shrimp cooking until they turned pink. Added the onions and let rest in the oven for an hour. Add the lemons right before serving as they will make the sauce bitter if cooked into it. Guest enjoyed about a cup serving portion.
Labels: 1 Appetizers Creole Recipes Seafood Seasonings Shrimp
Location: Washington Square, Mobile, AL 36604, USA