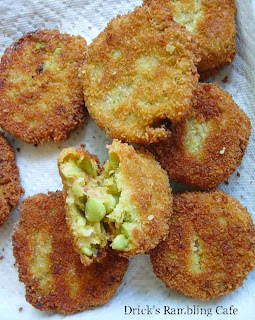 For some reason when I opened my kitchen door and belted out those words, it didn't ring the same feeling as I imagine Creole women felt at the turn of the last century. Then, I am not Creole nor a woman selling hot calas in the squares or on the streets. It did generate a few strange looks followed by happy waves of hands; my neighbors know I'm a little off somedays. They just nod, smile and wave knowing everything will be fine, once I get back on medication.


Calas are said to be entrenched in southern history, a delectable fritter brought over from the rice areas of Ghana by slaves. Calas are still made there today, not so
much now in the states and that is a shame. It is rumored calas were an important tool in freeing the slaves in New Orleans. Before the Louisiana Purchase, according to the Code Noir, slaves did not have to work on Sundays and if a slave demanded to purchase their freedom, the owner would have to comply. Selling calas on Sunday helped many slave women buy freedom... that was according to Spanish rule, and to legends. But the Code Noir of 1724 wasn't exactly all that, at least not after the Spanish rule ended. In fact, blacks could not sell any commodities for profit. However, calas were sold by many, by slaves for their owners for monetary gain, by Creoles freely and by coffee houses serving them along side the famous Cafe au Lait. 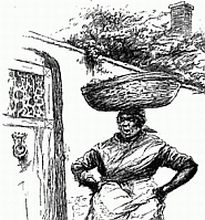 In our age today, beignets have taken over calas, and like I said, that is sad, nothing wrong with beignets mind you, but sugar dusted and light as a cloud, the old-fashioned rice calas are hard to beat. There are many recipes, here is a very simple Creole one:

Now what got me stirred up about calas was a friendly plate of some butter bean calas giving to us at work by our neighboring catering kitchen. Sadly, I did not get to eat any, but then was surprised when given a run down by one of my co-workers on his savory recipe. Being a caterer himself and no longer in the business, he stills loves to cook and create recipes like this one. And that is the one I am sharing today, well, with a little of me in it too. Enjoy!

Butter Bean Calas
Great side dish and appetizer too 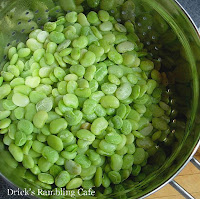 Cook the beans in lightly seasoned water for 5 minutes until tender. Strain well and divide in two placing half of beans in a blender or food processor. Add the tomato, pepper, seasoning salt, garlic, Tabasco and Worcestershire and about two tablespoons of the chicken stock. Pulse to blend into a thick, chunky paste adding more stock as needed. Remove to a bowl and carefully fold in the remaining butter beans.

Spray a baking pan with cooking oil. Scoop about quarter-cup portions on a the pan for serving portions or by a heaping tablespoon for appetizers. Refrigerate for an hour or longer.

Dust the top of each cala with seasoned flour and flatten in the palm of hand and coat with the seasoned flour forming as you go. carefully dip into the egg and into the panko coating well.

Heat a large skillet over medium high heat and when hot add cooking oil to depth of 1/4-inch. Fry calas, without crowding the pan, until golden brown on the bottom. Flip with a spatula and brown the other side.

Serve with a Creole sauce of choice like Louis Sauce, Tabasco Sauce or an equal mixture of mayonnaise and bottled Chili Sauce with a little Creole seasoning will do just fine.