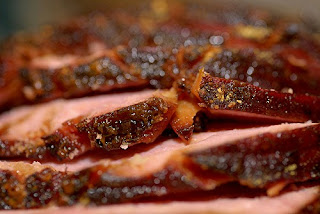 A busy week means consolidating some of the cooking time as well as simplifying mealtime planning.

Combine:
1/2 cup of brown sugar
with enough bourbon to moisten
Stir in:
1 teaspoon coarse grain mustard
1 tablespoon prepared horseradish, pressed dry
and rub all over a 3 to 4 pound ham.

Place in a slow cooker and cook on high for an hour. Add a can of cola and cook on low for 6 hours.

Remove if desired and glaze with drippings in a hot oven for about 20 minutes to caramelize the outer layer.