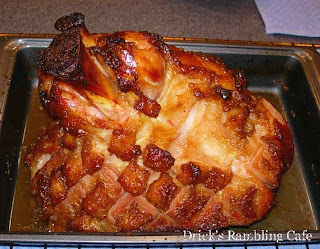 A ham for all seasons...

I am sure many of you baked a ham over the last couple of holidays, Thanksgiving and Christmas, and many will bake one for the New Year too. In the south, it is a tradition to have ham, or some type of pork served along with the likes of Hoppin' John, White Rice, Collards, Turnips or other greens and cornbread of course.

FYI... in the south, the symbolic pig served on New Year's Day has many meanings. For instance, a pig cannot turn it's head to look backwards without completely turning it's body around, thus to us a pig represents progress, as in always rooting and looking ahead. Pigs are symbolic in both wealth and health.
In the past harder times, owning a pig, one was considered better off than most as a family could eat and survive a harsh winter from the fatty meat of just one pig. In many cases, it was a matter of life and death. The most symbolic 'superstitious' thing we believe in is that eating pork on New Year's day will bring us prosperity. You see, to us, eating ham, and lots of it to the point of gluttony, as in 'being a pig' will bring about wealth. Some even think the fatter the pig, the fatter the wallet and some folks believe eating pork on this day means they will never go hungry.

Now the thing I dislike with most baked ham recipes is that most leave the skin and the thick layer of fat on the ham. Sure, I know it's left on for protection, (and mainly for the superstitious) to baste the ham and help retain moisture, but what I don't like is that all of that wonderful glaze, all of the crispy, succulence of flavor is removed for serving. To me, that's not acceptable. It's like serving a cake and then removing the icing for goodness sake.

So of late, I have baked my hams in the oven using my method below, first cutting away the un-wanting skin and fats and basting often to retain juiciness. The taste for this ham and recipe is pretty much like I cook my Crocked Ham in the slow cooker. Enjoy!

Allow the ham to come to room temperature in a cool location for about an hour or so. I like to wash mine under running water and pat dry placing a dry cloth over it as it comes around. Rather you prefer a butt or shank ham is up to you, I like both.
The ham today is about a 12 pound shank, however, I wrote the recipe for the first time I baked one using a 8 pounder. Increase ingredients as needed.

Combine in a small saucepan:


Bring to a simmer and allow bourbon to cook out reducing back to just the butter. Remove from heat and stir in:


Set aside and allow to cool.

Place the ham in a roasting pan directly on the bottom (no rack) of the pan. Notice I placed the ham unconventionally cut-side down. With a sharp knife, remove any skin and cut away the fat leaving only about 1/4-inch layer thickness of fat. Score the ham in a diamond pattern cutting into the meat to a depth not deeper than 1/2-inch.

To the saucepan containing the brown sugar reduction, stir in:


Rub this mustard mixture all over the ham, bottom too, making sure to get into the cut crevices. Place ham in the oven on the middle lower rack. Immediately, turn temperature down to 325 and bake for 20 minutes.

Add into the roasting pan:


Use a spoon to mix up the cola solution a bit and coat all of the ham's surface with this basting solution. Baste every 15 minutes ( I use a turkey baster). Cook the ham until the internal temperature is 165 degrees on a meat thermometer and the ham's surface is crispy and dark brown. (Mine took about 2 hours.) Add more cola if the liquid starts to evaporate away although it is fine not to have any remaining right at the end. Remove from oven, place a foil tent over for 15 minutes if serving right away or wrap in foil and let rest if serving time is more that 30 minutes away.

Be sure to save the ham-bone for a delicious stock.

Adding a shiny penny or dime to the pot of Hoppin' John ensures better fortune and luck. The person that receives it in their bowl will have the best of both in the coming year. Of course, swallowing it wouldn't be so lucky.

Avoid foods that will bring bad luck, such as chickens. Poultry scratches backwards which will cause one to dwell on the past or regret. Fowl, like good luck, could also fly away. Be careful of shrimp and lobster on this day as they too move backwards leading to setbacks.
Labels: Celebrations Ham Holidays Home Style New Year's Pork Sunday Dinner Ideas
Location: Mobile, AL 36604, USA