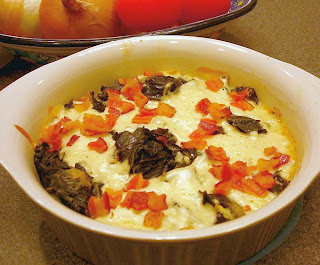 This is a classic I remember from the old days, meaning my youth when cooks in the kitchen had a soulful vibe going on in creating dishes (foods)  not only for our enjoyment but theirs as well. Oh yeah, now they knew how to cook. In our household, on occasion, we were entertained with Emma Lee, daughter of Annie Bell who was my grandmother's permanent kitchen entertainer. I use the word 'entertainer' because never did a day go by that a funny, entertaining fiasco occur. Emma Lee enjoyed acting up to the more modern likes of Redd Foxx or George Kirby and singing Marvin Gaye while Annie Bell was happy gyrated to the tunes of Etta James and James Brown, all while frying some of the best crusted chicken I have ever known. She is the one who taught me how to cook Green Beans and New Potatoes along with so many other tricks in southern cookery. And not only could she sing, she could shake a tail-feather too. Now all this went on mind you while we young'uns were 'helping out' and while the elders were off doing, well, their elderly things. And if things got broken while 'helping out', well, we of course took the blame even though never was that believable.

I mention all of this only because the essence of this 'dish' comes from the hands of folks that knew how to really cook what is known as 'soul food.' Yes, James Brown had soul, no doubt about that, but somehow, I never made the connection to the foods until recently. I have always understood the relation of African-American cuisine to the meager ingredients available to the slave and sharecropper black families of that dark period of time, of folks trying to balance a simple-to-cook yet hearty meal of what ever became available into something nutritious. Being southern, that is one of many things that was taught to us by my mother. Back in the day, finding good food to eat was hard to come by and meager ingredients often made a meal in order for survival. To me, to put it in context, the term 'soul food' means eating and nourishing the body so that your soul has a chance of survival. Today may be a little different, yet we see the term used more often as 'food for the soul' and thanks to churches, shelters and food kitchens, feeding the souls of many who have no way of obtaining food to survive is a generous act all of us should support. 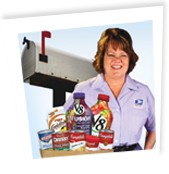 16 % of Americans are at risk of hunger!

Less than three weeks away, the weekend of Mother's Day in fact, is the National Association of Letter Carriers Stamp Out Hunger Food Drive. I urge everyone to start today in putting away non-perishable foodstuff for the drive and remember, all donations go directly to local food banks, pantries and shelters. Watch for the bags or make a drop-off.

Rinse greens underwater in a deep sink if possible allowing grit to settle to bottom. Remove greens and drain water rinsing away the grit. Repeat until no trace of grit remains. Remove the thick stems and discard any blemished leaves. Rough chop collards and put aside.

In a medium stockpot, cook bacon until crisp. Remove bacon with slotted spoon to a paper lined plate. Remove all but 3 tablespoons of bacon grease from the pot and reserve remaining for later use. Add butter to pot with the bacon renderings and when melted, add onion and jalapeno. Saute until onion is soft. Add a handful of collards at a time tossing all while cooking until the greens are wilted. Add the chicken stock and season with salt and pepper to taste. Simmer covered on medium low until tender, about 10 minutes. Remove cover, add the vinegar, stir and continue simmering out most of the liquid, about 30 minutes. Do not allow collards to scorch.

Meanwhile, make the sauce which is a basic white milk gravy using the bacon fat for flavor. Add the grease to a saucepan over medium low heat, whisk in the flour until smooth and when bubbly, slowly whisk in the milk stirring until a medium thick sauce is achieved. Season with salt and pepper and remove from heat.

When the collards are cooked and most all liquid is cooked out, place into a colander and allow to drain thoroughly pressing with the backside of a large spoon if necessary to squeeze out the liquid. Spoon into the casserole and spoon the sauce on top.

Cover with foil and bake for about 20 minutes or until sauce is bubbly and has melding into the greens. Remove and sprinkle with the crisp bacon before serving.

Thank you Annie Bell for allowing me to 'help out'.