Here's a good ol' recipe for baked potatoes that comes from one similar to The Pillars restaurant formally in Mobile unfortunately now closed. Baked until the starches get just right and whipped with sour cream, cream, butter and all the other good things that make a stuffed potato "over-stuffed."

We love it as one of our sides occasionally on steak night but it is so darn good, I would serve this as a side with many entrées.  It really takes no time at all as if you've made twice baked potatoes then you know that's about as hard as this recipe gets. About the only thing needed is a good stiff whisk and a strong arm, or do like I do and get out the electric hand mixer. It will whip up those potatoes in no time flat...I have added a few of Filippo's original version in parenthesis. Enjoy!

Be sure to scrub the potatoes well under running water and remove any blemishes. Take a sharp tip knife and pierce several times deep into the potatoes on all four sides. Place in a baking dish and microwave for 3 minutes on high. if using extra large potatoes, you may want to invert and microwave another 3 minutes as I did. Place in the preheated oven and cook for 1 hour or until soft.

Remove from the oven and immediately make a slice down the top center of each potato. Do not open, just make a cut into the potato. This creates a release of steam making the potato's starches to their thing. Let set about 10 minutes.

Lay a kitchen cloth or paper towel (several thicknesses) in your hand and place potato in your palm. This will alleviate burning your hands, trust me on this one. Either slice each potato in half using 4 halves of the largest for 4 servings or remove the top quarter of the two largest ones if stuffing for 2 hungry folks and cut the third in half. With a spoon, scoop out the flesh of the potato and place in a large bowl being careful not to tear the skin of the shells you will be filling; put good shells aside. Discard the remaining skins. 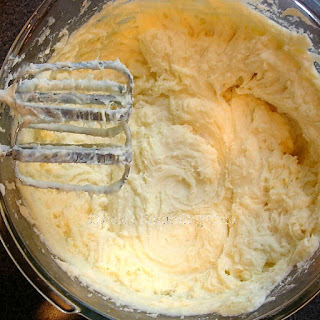 Beat the potatoes with the mixer until smooth. Add the sour cream and whipping cream. Beat until creamy. Stir in the crumbled bacon, the 3 tablespoons of butter, chives, parsley, cheeses, salt and pepper to taste. 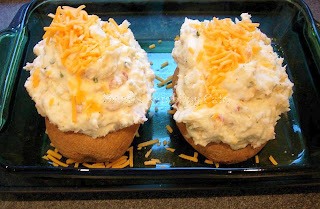 Spoon the mixture into the two largest shells (or the four) and place back onto the baking dish. Pile any remaining mixture high onto each potato. Drizzle or brush with the melted butter and sprinkle with additions cheddar cheese. Return to oven and bake for 15 minutes or until they are heated through and the cheese begins to slightly brown.

~Adapted from a recipe of chef Filippo Milone, The Pillars