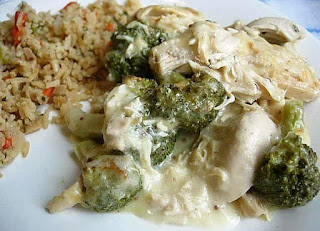 Broccoli, Chicken,
Cheese Sauce
. . . what more is there?

It is said Chicken Divan is from a restaurant of New York's now gone Chatham Hotel, from a dish that resembles more of Chicken Parisienne (Parisienne being the hotel's restaurant name) than the soup can versions our moms made for us (at least my generation). The slow cooker Chicken Parisienne recipe I featured over three years ago used vermouth, sour cream, mushrooms and yes, the ever popular cream of mushroom soup.

Then there is my creamy Chicken Divan over rice casserole that forgoes the soup can relying instead on a little of heavy cream thickened with arrowroot and flavored with dry sherry. It may be a tad bit healthier, but it doesn't lack taste, we still like it today as well. And then there is another dish I made, one I called Chicken Divan My Way with broccoli, spinach, hints of curry and yup, two types of cream of canned soups all in a sauce covering bow-tie pasta. Oh yeah, gonna remake that one for sure.

I guess you can say we kind of like Chicken Divan. So, here goes another recipe. This one is actually made from many recipes. A little bit of this taken from that, and it came out gosh darn heavenly. Hope you try it and if you do ... Enjoy!

Creamy Chicken Divan Casserole
a most delectable recipe
serves about 6

Place the thyme, bay leaf, salt, pepper, celery and water in a medium saucepan. Bring to a simmer and add the chicken. When boil returns, reduce heat to low. Simmer for about 20 minutes. Turn off heat and allow chicken to rest in broth.

Steam or quickly pan cook the broccoli with a little of the chicken broth. Remove from heat just as it turns bright green. Strain well and place in a buttered 3-quart casserole.

Melt the butter in a large saucepan over medium heat and add the flour. Reduce heat to low and stir for 3 minutes to rid the flour taste. Do not brown. Slowly, 1/2-cup at a time, incorporate two (2) cups of the chicken broth into the pan stirring with a wire whisk. Stir in the sherry. Cook for about 8 minutes stirring all while. Stir in the Dijon, white pepper and lemon juice. Return to simmer, then remove from heat and stir in half (1/4 cup) of the Gruyère.

In a mixing bowl, beat the whipping cream with wire whisk beater until stiff peaks form. Fold this mixture into the pan of sauce. Season with salt to taste.

Remove chicken from the broth and slice into bite size slices or pieces. Place chicken into and around the broccoli.

Spoon about half of the sauce over the broccoli. Stir the Parmesan into the remaining sauce.

Place in a preheated 375 degree F. oven for about 20 minutes to heat up the sauce. Turn broiler on high and brown the top if desired.