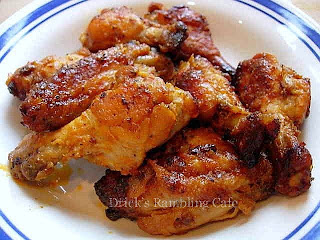 My best take on
Buffalo Wings

After several attempts of dabbling with ingredients, many wings later and many tips discarded, I finally tweaked my recipe to my liking. Hopefully, you will like them too.

Now I am a true believer in using a brine with wings mainly to get them all pump up with extra moisture, which of course helps 'em from drying out. It also adds another layer of flavor to the sweet meat. It doesn't take but an extra few minutes of prep time and about 30 minutes in the fridge is a good rule of thumb, although I do it longer. A reader once wrote on another recipe that he had never used a brine on wings but after doing it once, will never cook them again without it. It really does matter - so I think too.

Although you might think hot because of the name, these wings are to me fairly mild - with just enough heat to carry the name and with just enough slightly sweet flavor to make you want more. Enjoy!

Go ahead, do it - place the chicken wings in a sealable bag and add a brine soulution. This time I used I used 2 cups water, 1/3 cup Kosher salt, 1/2 cup vinegar, 2 tablespoons sugar, 1/2 teaspoon black pepper and 1 teaspoon crushed oregano. Refrigerate for at least 30 minutes or no longer than a couple of hours.

Meanwhile, make the sauce by placing the oil, butter and remaining ingredients in a saucepan. Allow mixture to come to a simmer over low heat. Stir to incorporate and let simmer about 5 minutes. Remove from heat and set aside.

Drain wings and pat dry with paper towers. Arrange on baking pans (sprayed with cooking oil) separated so each are not touching skin side up. Place in oven, reduce heat to 375 and cook for 20 minutes. Turn the wings over and cook 10 minutes.

Remove wings to a casserole or deep pan. Pour sauce over wings, toss to coat and return to oven. Cook about 15 minutes tossing occasionally or until most of the sauce has cook onto the wings.

Note: I know these would be exceptional cooked outside on a grill, however, the weather did not co-operate this time. I plan to do it soon by cooking the wings off heat, medium high until cooked followed with several baths into the buffalo sauce.
Labels: Appetizers Chicken - Poultry Mardi Gras Recipes Sauces
Location: Mobile, AL 36604, USA