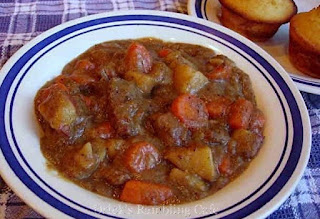 When emigrants arrive to the United States, they bring with them their native way of cookery. America is blessed with such a rich diversity of food cuisines from a wealth of countries. The south is no different as I have mentioned many times and I believe it is here, where a most homogenize merging of foodstuff comes together, just like in a good gumbo.

Most historians when mentioning the Irish migration tend to focus on the settlement of the New England states, although during the 18th century, the Irish flourished heavily in Georgia and the Carolinas as well moving onwards into the Delta areas. It is here that many became prominent citizens, rising above the immigrant mentality held in the upper New England states of New York and Massachusetts. Much of the rise came about from the Irish fighting in the American Revolutionary War and doing so won the hearts and camaraderie of fellow southern citizens. It is here, in the south where the Irish found tolerance and where their heritage was welcomed. And it is in the south where Irish families felt acclimated, becoming part of a community while gaining foothold and persevering tenacity.

After 1815, the Irish immigration rose to over 33,000 per year and of those, the laborious work of digging, forming canals for waterways and moving earth to make way for railways in the south was done by many of the Irishmen. Others became doctors, lawyers and plantation owners. During this time, New Orleans, which was the largest city in the south, became one-quarter Irish. It is no wonder there is such an influence of Irish character in New Orleans. Mobile had its share of Irish influx too and even today, Callahan's Irish Social Club exists just a couple blocks from our house.

Which brings us to the recipe today, one of those peasant style, home-goodness, one-pot meals that slowly comes together in making a full-bodied, hearty stew of pleasantry. It blends together the distinctive characteristics of the southern Irish, a little of my momma and a whole lot of me. You see, the recipe is based on one my momma made many times and in making her version of Irish Stew, she used cubes of lamb shoulder along with large chunks of carrots, potatoes and turnips. You could too, either way . . . enjoy!

In a medium bowl, sprinkle the beef cubes with a little salt and pepper. Add enough flour lightly coating each piece. Spread on a pan to keep dry.

In a stockpot or Dutch oven, heat the oil and butter over medium high heat and when butter begins to brown add the beef, just enough to cover the bottom. Sear bottom side of the beef to a light brown, about 3 minutes and turn meat to sear the other side. Remove to a plate and sear remaining beef cubes. Tent the plate of beef with foil and keep warm.

Add the onions to the pot and cook stirring onions until the onions caramelize from the fond in the pot. Add the garlic and cook for a minute or two. Add any remaining dusting flour along with enough to make about 1/4 cup. Stir flour into the onions and cook about 3 minutes. Pour in the beer (at room temperature), beef stock, Worcestershire and add the bay leaf, cayenne, thyme and sugar. Allow liquid to come to a simmer on its own (not increasing heat to do so) and at simmer add the browned beef. At second simmer, reduce heat to medium low (barely simmering) and cook covered for about 2 hours.

Stir the carrots and potatoes into the stew mixture. Cook 30 to 45 minutes covered or until the potatoes are tender. Add a half-cup of hot water to the stew if the mixture becomes too thick.