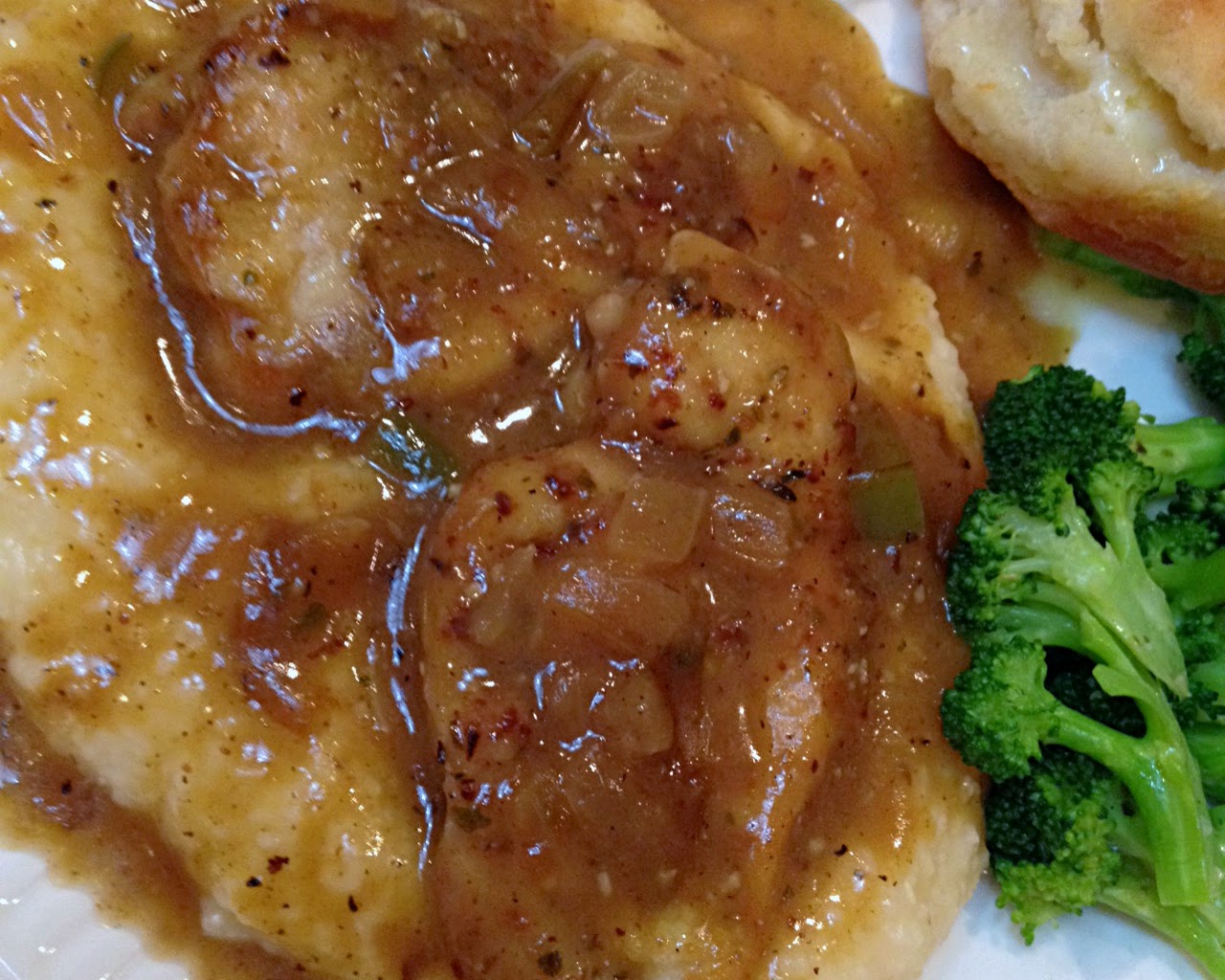 For Brunch, Lunch or Supper.

Many folks refer to this method of cooking as slow braise but in the south, we call this classic slow-simmering as a 'smothered' way of cooking tough cuts of meat or to better put it, to also tenderize pieces like the chicken in this recipe. It's the same texture you get when you wet-braise larger cuts of meat over low heat for several hours to achieve that 'fall-off-the-bone' or 'melt-in-your-mouth' taste experience. It happens when the elastic connective tissue breaks down and melts into the pan creating the rich fond so desired for sauces, or as we call it, gravy.

Smother: A homey way of tenderizing pieces of meat over slow heat for several hours using a caramelized vegetable reduction. In Southern homes, the flavor is intensified when using bacon fat to develop a slightly smoky, salty sweet flavor into the roux for the gravy.


There is but one good technique to acquire the smother and that is by first applying a good, quick browning of the surface of the meat. The pan must be hot enough to form a sizzle on the surface and to keep the meat from excreting too much of its juices. Some may know this as a good sear but more importantly than just a seal of the surface is the actually browning to form a crust, both on the meat and in the bottom of the pan. This lays the foundation for a good smother, for the meat's outer layer and in the pan forms the fond that will develop the character of sorts of the sauce. To opt out on this step is to lose out of the most important flavoring of the smother.

Once the meat is browned and the crust is formed into a caramelized surface of goodness, you're ready to move on to the second important flavor step in creating a good smother: Developing the aromatic vegetable flavor into the pan. This is nothing more than a moderate saute of diced vegetables (in the south, most always onions, bell pepper, garlic or celery) into the fats and fond left in the pan from whereby the meats were quickly cooked. Once the flavor bits are picked up from the bottom of the pan from this method of deglazing, a flour thickener is added forming a basic roux. Heat is normally reduced to low allowing the vegetables to sweat, and the meat is applied on top. Hours later after slowly melting away, the vegetables become a most wonderful, full-bodied sauce thanks to the time-honored technique of the smother.

Dry the chicken with paper towel and pound until uniform in thickness; the thinner the better but not so thin as the pieces break apart. Season each side with a light sprinkle of salt, pepper and Creole (or Cajun) seasoning. Dust each side heavily with flour. Set aside in a single layer.

Heat a large skillet over medium-high heat and when hot, add about 2 tablespoons of the oil mixture. When shimmering, add chicken to pan being careful not to overcrowd pan. You most likely will have to cook in two batches. Allow to cook, about 2 minutes on each side until nice and brown; do not overcook. Add more oil as needed making sure meat is 'sizzling' in pan. Remove to plate and put aside.

Begin the vegetable reduction by immediately adding butter and when melted, add vegetables. Cook stirring often scraping up the brown bits on the bottom of pan. Continue until vegetables are softened and onions are slightly browned around the edges. Allow moisture to cook out. Sprinkle about 1 tablespoon flour on top of vegetables and slowly stir to mix in. If needed, add more flour in 1/4-teaspoon increments until moisture is absorb. Allow to cook a few minutes and slowly incorporate in the chicken stock.

Simmer until slightly thicken, reduce heat to low and add chicken on top. Cover with tight fitting lid and allow cook for about 30 minutes or until vegetables have reduced to mostly liquid. Watch carefully toward the end and add more stock or water in needed.

for the Creamy Cheese Grits

Bring water to rapid boil and quickly whisk in heavy cream, grits and salt. At second simmer, add cayenne and reduce heat to low heat. Cover and cook for 20 minutes stirring often. Taste test for saltiness and creaminess adding more salt or water if needed. Stir in butter until incorporated and then slowing stir in cheese. Turn off heat.

Serve on warm plates topped with smothered chicken and gravy.