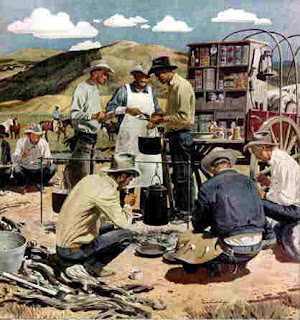 Now if we were in the old west, going back in time, we might come across a campfire with some vittles like these. Fine eating on the trail, cooked over smoking embers, cowpunchers had it pretty good when it came to cooking fresh beef. As told, the birth of the old west cowboy actually has roots from the early cowboys of Mexico, the mestizos or the Indians who took on the horse roping skills from the Spanish conquistadors.
But enough of that, let’s get right on to today’s post. Smoked Brisket - one of my favorites and with a side order of Western Pinto Beans. A little bread is about all you need to finish off this dish. Here’s how I do it.

My brother-in-law Joe, a Texas native, taught me a thing or two on choosing a good brisket. His technique and criteria for a brisket is in my cookbook, Grits to Guacamole as are these two recipes. The most important thing to look for is one lean in fat with good marbling throughout. You want some fat on top, at least one-eighth of an inch but no more than one-quarter of an inch. Now choose a good rub that you can trust like the one below, my BBQ Rub for Texan Brisket.

Wash off the brisket, pat dry and mix the rub ingredients together. Sprinkle the mixture heavy-handedly coating the brisket all over. Let set while you prepare the fire. 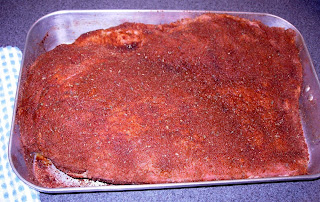 Now Joe cooks his brisket in a smoker as I have many times also, but some of you might not have a smoker, so we’re going to do it on the gas grill.
Place desired amount of wood chips (Joe likes mesquite while I like hickory) on a double layer of aluminum foil and fold into a packet. Prick holes along the topside as shown.

After you let the brisket set in the fridge for several hours or until you can’t stand it any longer, place the foil packet in the grill preferably on a grate but above the flames. Hopefully you haven’t lit the grill yet. Place the brisket on the opposite side and turn on the fire, medium-low, on the wood chip packet side. Do not light the side with the brisket. Now close the lid and wait. After about 30 minutes, the smoke should have done its thing. Turn the heat to low and from this point, cook for about 2 hours basting every so often as mentioned below. 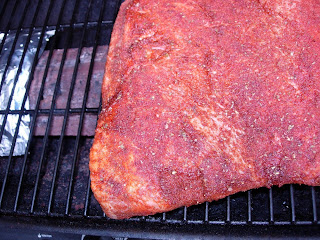 During the smoking time, make a basting solution like my Brisket Mopping Sauce to keep the brisket moist the last 2 or 3 hours of cooking time. Oh, I forgot to mention this is an all-afternoon event. Add the oil and spices to a medium saucepan, heat until it just start to sizzle, as shown, then carefully add the liquids and the lemon. Let simmer for 5 minutes. Turn off heat and let cool.

Always use a mop to apply the basting solution as above; using a brush will disturb the rub. You do not want to wash it away, just keep the brisket moist during the cook time. Most folks can tell just by looking and poking the brisket when it is done but to be on the safe side, cook it until the internal temperature of the largest area reads 165 degrees F. When it reaches this point, remove and wrap tightly in several layers of aluminum foil and return to the grill, placed off the heat again, for another hour.

After finishing making the mopping sauce, start cooking up the beans. Hopefully you soaked them overnight, if not, well move on to something else.
Rinse the beans under running water several times. chop the onion and bell pepper and put aside, 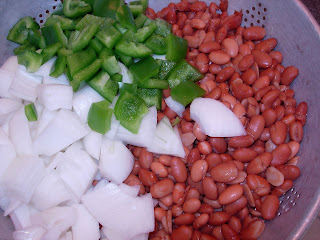 In a large stockpot, add 4 cups of water, 2 smoked ham hocks (or use any smoked meats or substitutes for flavor) and the seasonings listed below. Bring to a boil and let simmer for about an hour. Remove the hocks and put aside to cool. Add the vegetables and cook another 30 minutes. Stir in the tomatoes along with any meat from the hocks and simmer on low for 2 or 3 hours. Adjust seasonings to your liking. I sometimes will add Mexican spices, cayenne or more peppers depending on my mood. 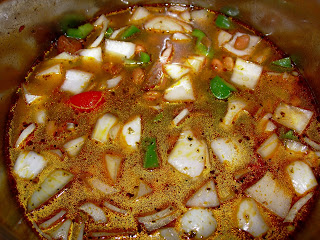 Check the beans after the first 2 hours, add more water if needed and cook until desired consistancy. I like to mash up a cupful making a creamier base. 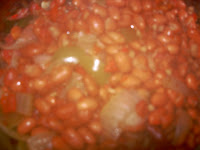 Now, it should be about time to remove the brisket from the grill. The internal temperture should be about 195 degees F. (This is one time you want beef to be at this temp.) Let set at room temperature for 30 minutes. When slicing, be sure to cut across the grain in thin slices.  Serve up with the pinto beans and enjoy. About the only thing that might be missing would be some hot corn pones and extended britches. 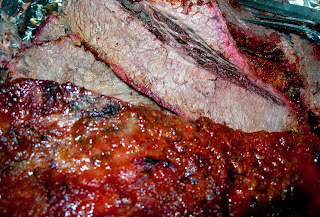 
Western Pinto Beans
1 pound dry pinto beans -soaked overnight
1 teaspoon chili powder
1 teaspoon garlic powder
1 teaspoon black pepper
1/2 teaspoon crushed oregano
2 smoked ham hocks or smoked meats
1 large onion -chopped
1 small bell pepper -chopped
1 jalapeño -seeded and diced
1 can chopped tomatoes -optional
Soak beans overnight in water. Drain, rinse well and set aside. In a large stockpot, place hocks and the seasonings. Add 4 cups of water and bring to a boil. Simmer for an hour or so and then remove hocks. Add vegetables and simmer another 30 minutes. Strip meat from bones and return to pot along with the tomatoes. Add water to cover and simmer on low 2 to 3 hours stirring every so often. I like to check the flavor after an hour or so, adding additional seasonings or peppers to suit my mood of the day. Serve with green onions on top.
Labels: Beef G to G recipes Outdoor Cooking Recipes Vegetables