A Treat from
Sugar Cane Country 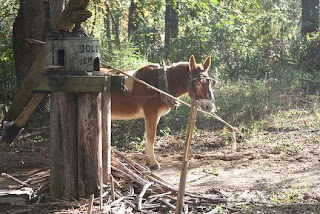 Now I know sugarcane grows all over the world in warm to tropical climates, this fibrous grass is more than a commodity in the south; it’s a given institution as well. One of my grandmother’s cooks, Annie Bell, grew sugarcane and made some of the best cane syrup I remember to date. We would go out to her place in the country and watch as the stalks, one at a time, was fed into a juice extractor and powered by a mule like this one. The juice collected into buckets and hauled to a large kettle (at the time it seemed like 6 feet in diameter) and boiled over an open fire to make the syrup. Her helpers dipped the syrup into quart size cans or jugs and she sold it for a few dollars.

Another product of sugarcane is molasses, which is more concentrated than syrup due to longer boiling times and with the removal of some of the sugar. There are four grades of molasses depending on how much of the sugar is removed. Molasses contains more minerals and vitamins, especially iron, than the syrup or juice itself. Table grade molasses contains about 60 percent sugar and has for years been used as a sweetener for foods.

I’m sure this recipe has many names and is said to be a form of gingerbread. It comes from an old worn page I collected years ago which contains a few recipes mentioning ‘mammy’ type cookery. A similar recipe is called New Orleans Ginger Bread but I prefer this one. Enjoy! 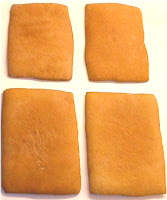 Mix the lard with the boiling water and stir in the molasses, sugar, spices and salt. Now sift and mix in as much flour you need to make a firm dough. Use your hands to mold the dough into planks 4 to 6 inches long and about 3 inches wide and almost a half-inch thick. Place on greased pans two inches apart. Bake in a slow oven (about 300 degrees F.) and keep looking at them until nice and brown. Molasses is apt to burn quickly. These keep well several weeks if kept in a tin box.
Labels: Cookies and Bars Creole